The following is an excerpt from: Flying - The memoirs of Emilio Herrera.

"During this period I made numerous balloon ascents (about seventy), some "Comfortable" (without overturning the basket", some "Good" (overturning the basket) and other "Lucky" (getting dragged or other accidents)" These terms are just a few of those in the official nomenclature describing the descents, which is too lengthy to relate here in its entirety.

Emilio Herrera and Fernandez Duro competed in the Grand Prix Competition of the French Air Club. "1905, one of the most important years of my life. Twenty-two balloon from several countries participated in this competition, piloted by the most celebrated aeronauts in the world. Ours was the only Spanish balloon entered. The departure of the balloon took place in the Tuilleries gardens in Paris, around the edge of the lake. Strong prevailing winds made handling at the take-off difficult, and one balloon, half-inflated, was swept away by the wind and fell into the lake. When we were given the signal to take off, I was in charge of the altimeter and Fernandez Duro handled the ballast, casting it off as I instructed. At once we found ourselves in the clouds, so low they were touched the rooftops, and I saw the altimeter indicating we were descending, so I asked the ballast be cast off. But the altimeter showed that we were still descending, and, by now alarmed, I asked for more ballast to be cast off, until blue sky appeared above us. The balloon ascended so rapidly that we passed through the cloud cover quickly. At this point I realized the cause of my error: The gradations on the altimeter, which we had bought in Paris, were reversed from the direction of those we were accustomed to using, so that when I thought I was reading descent, it was really ascent. This mistake of mine contributed in large measure to our success, because our balloon, very lightweight from the beginning, reached a high altitude where it remained stable all night, and we enjoyed the spectacle of a splendid starry sky with a full moon over a white sea of clouds drifting below that prevented us from seeing the ground or knowing in what direction we were moving. We only knew that we were being carried at high velocity. Through he clouds we could hear the sound of a real hurricane raging on the earth below us.

At midnight another balloon emerged from the clouds and rose to our altitude. From the basket they asked in French, "Who are you?" We answered "Duro, Herrera" and they asked, "Spanish?", and we replied, "Who are you?" Then before they had time to respond their balloon descended and disappeared into the clouds.

So we passed the night without having the slightest idea if we were moving north or south, east or west, or if we were over land or sea. At dawn, when we expected to receive a boost from the sun-as it heated the balloon up it should have allowed us to gain altitude and prolong the trip-a black cloud appeared above us and flakes of snow started to fall. This soon developed into heavy snow that weighed the balloon down considerably, causing it to descent in spite of our efforts to keep it up by casing off all our remaining ballast. Passing through the clouds on our forced descent, we found ourselves flying eastward at lightning speed, first crossing over some snow-covered mountains and then over a snowy plain dotted with scattered trees and crossed by a few roads. We were flying at a speed of 100 kilometers per hour and we could not control the balloon's descent because we had no more ballast to cast off. The braking anchor, on a 100-meter rope, skidded through the snow, hardly slowing us down, so we decided to through out the anchor on the 15-meter rope. This one, as it crossed a road, hooked onto a cart and overturned it, causing the balloon to pause momentarily and dashing the basket against the ground. As soon as the anchor came loose from the cart we resumed our dizzying flight until it caught once more, this time on the eaves of a roof built of wooden rafters covered with brush and stones on the tope of a little house, uprooting it and leaving the house uncovered and causing the basket to bang into the ground again. Loose once more, the balloon continued on it un-braked course and I saw with horror that an enormous tree with antler-like branches was advancing towards us like an express train. The crash was terrible. One branch pierced the basket, and the balloon brought to abrupt halt, burst like a hot chestnut, its cloth fluttering in the hurricane winds. We were stranded in the treetop, unable to move, tangled up in the balloon cords and tree branches, until some men and women, all wearing high boots, came to help get us down from the tree which, with a few blows of the axe to the lower part of its trunk, fell to the ground along with the now empty balloon.

We could not understand the language they spoke, so to find out where we were we showed them a map, but these people had never seen a map and were unable to clarify the situation. Finally the school teacher from the next town pointed out our location with his finger. The town was called Weisskirchen, in Moravia, Twelve Kilometer from what was then the Russian Border, and the snowcapped mountains we had crossed were in Bohemia.

When the flight ended the two aeronauts had covered a distance of 1086 kilometers at an average speed of 87 kilometers per hour. They took second in the race. This is one of the many balloon flight covered in Mr. Herrera's memoirs. 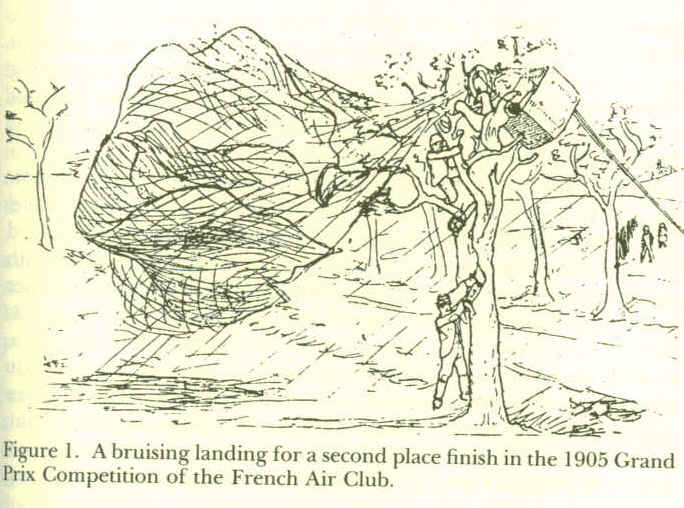