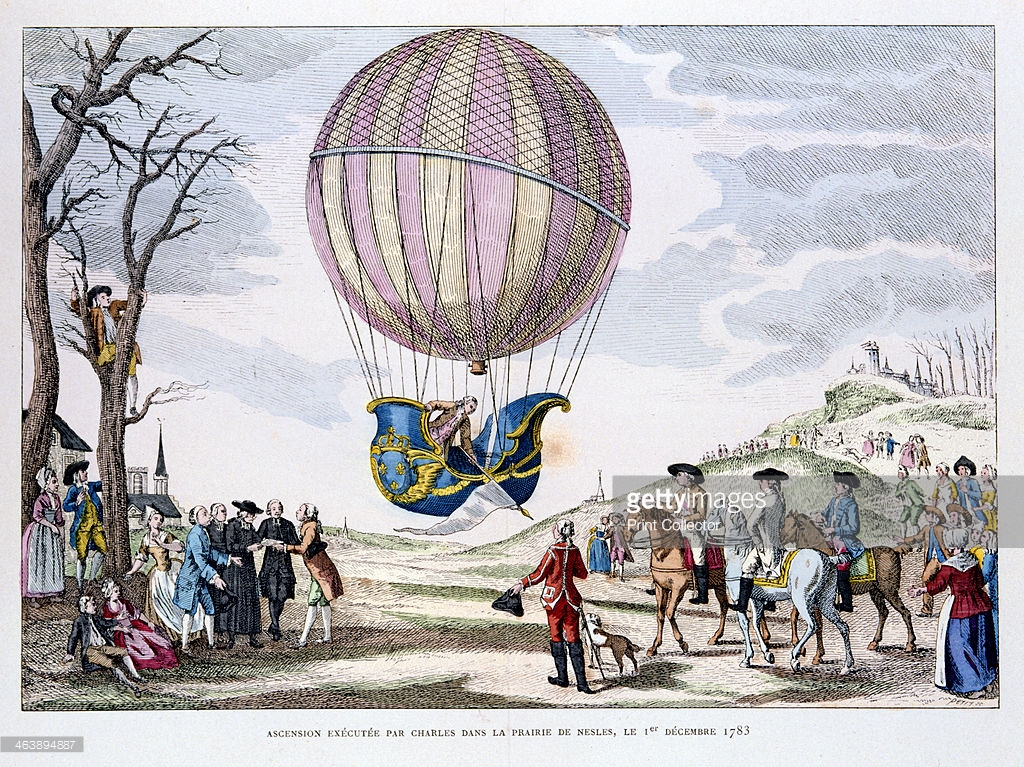 1783 -- The first gas balloon flight was accomplished: Jacques A.C. Charles a French professor of philosophy who had been experimenting with the recently discovered hydrogen gas for applications with balloon flight. With help of the Noel Roberts who developed a rubber as a coating material provided the key to containing hydrogen in the balloon fabric. 10 days after the first hot air balloon flight was made by the Montgolfier brothers.

1785 -- The First Balloon across the English Channel: In the early days of ballooning, crossing the English Channel is considered the first step to long distance ballooning. Pilatre de Rozier, the world's first balloonist, is killed in his attempt to cross the channel. De Rozier's experimental system consists of a hydrogen balloon and a hot air balloon tied together. Tragically, the craft explodes half an hour after takeoff. This double balloon helium/hot air system, however, remains among the most successful designs for long distance ballooning. This same year, French balloonist Jean-Pierre Blanchard and American John Jeffries become the first to fly across the English Channel.

1793 -- The First Balloon Flight in North America: A 45-minute flight from Philadelphia to Gloucester County, New Jersey is made by Jean Pierre Blanchard on January 9. George Washington is present to see the balloon launch.

1859 -- The American aeronaut John Wise and John La Mountain made a dramatic flight in the Balloon "Atlantic": from St. Louis to Henderson, NY covering 803 miles in 20 hours 40 minutes. The flight is a trial run for their projected Atlantic Crossing.

1862. -- English Meterologist James Glaisher with Henry Coxwell, undertook a dangerous ascent to a height of more than 26,246 ft. They both lost consiousness and nearly died of asphyxiation.

1870 - The "Neptune" was the first balloon sent off during the siege of Paris. A survey was made of the Prussian position, and the balloon landed in unoccupied territory. Some 64 balloons carried about 100 passengers left the city during the Seige.

1897 - S. A Andree in "The Eagle" hydrogen balloon leaves on an exhibition over the Arctic. Andree and his companions landed and struggled to survive the elements and animals. Their fate was not know for 33 years when explorers visiting white island found their remains and camp in 1930.

1794-1945 -- Balloons Used in Wars: From the U.S. Civil War, through World Wars I and II balloons are used as tools for warfare, for transportation surveying, and communication.

1935 -- New Altitude Record is Set and Remains for 20 Years: Explorer II, a helium gas balloon, sets the altitude record at 72,395 feet, or 13.7 miles, with two crew members on board. For the first time in history, it is proven that humans can travel and survive in a pressurized chamber at extremely high altitudes. This flight sets a milestone for aviation and paves the way for future space travel and the concept of manned flight in space. The highly publicized flight is also able to carry live radio broadcasts from the balloon.

1960 -- Altitude Record and Highest Parachute Jump: Air Force Captain Joe Kittinger jumps from a balloon at 102,800 feet on August 16th and sets a world high altitude parachute jump (where he breaks the sound barrier with his body) and freefall record that still stands today.

1961 -- Current Official Altitude Record Set: Commander Malcolm Ross and Lieutenant Commander Victor A. Prather of the U.S. Navy ascend to 113,739.9 feet in 'Lee Lewis Memorial,' a polyethylene balloon. They land in the Gulf of Mexico where, with his pressure suit filling with water, and unable to stay afloat, Prather drowns.

1987 -- First Hot Air Balloon to Cross the Atlantic: Per Lindstrand and Richard Branson fly a distance of 2,900 miles in 33 hours and set a new record for hot air ballooning. The balloon, at the time, is the largest ever flown at 2.3 million cubic feet of capacity.

2003 First Solo Flight around the world: July 3, 2003 Steve Fossett, the first person to circumnavigate the globe alone in a balloon he landed in southern Australia about 170 miles north-northwest of Adelaide. On Tuesday, Fossett crossed 117 degrees east longitude, which was where he started his journey on June 19 in his balloon, the Spirit of Freedom. When he completed the circumnavigation, Fossett was flying over the ocean off Australia's southern coast. His success in reaching one of aviation's most elusive milestones came after five previous attempts failed.